A Somm named Sohm, Streets in Bloom, and Manhattan Top to Bottom

“London is satisfied, Paris is resigned, but New York is always hopeful. Always it believes that something good is about to come off, and it must hurry to meet it.” — Dorothy Parker

If there’s one season when Manhattan is at it most hopeful, it would have to be spring. For me, at least, no other time of year can compare to when the city’s tulips and flowering trees are in bloom. A recent trip gave us a chance to savor a perfect NYC spring week and at the same time visit a new wine bar we’ve been eager to try and see some new sights in the city. No matter how many times you visit Manhattan, there’s always something new to try. No wonder the city is always hopeful.

We’ve had our eye on Aldo Sohm Wine Bar since it opened last September. For those who don’t spend a lot of time reading about the most talented and talked about sommeliers of the world, Aldo Sohm is one of them. A native of Austria, he says he became enamored with wine at the age of 19 when he visited a vineyard in Italy with his father. From then on, he devoted himself to making a career of his passion and, judging from his successes, he has done things right.

Since 2007, Sohm has been the wine director at Le Bernardin, one of New York’s legendary fine dining establishments. In his first two years, he shepherded the restaurant to win the James Beard Award for Outstanding Wine Service. He’s also been dubbed Best Sommelier in New York, Best Sommelier in America, and Best Sommelier in the World by various, reputable organizations. Yet, even with all his accolades, those who know him well say there’s absolutely no trace of pretentious wine snobbery in the guy. In fact, he’ll even give you handy tips on how to clean your wine glasses in this Youtube video.

Aldo Sohm Wine Bar, an off-shoot of Le Bernardin, is adjacent to the restaurant on West 51st Street in midtown. Featuring a delicious array of small plates from Chef Eric Ripert’s Le Bernardin kitchen, the wine list is every bit as extensive and creative as one would expect. The first page features a special flight each day, plus a healthy selection of wines by the glass. The many pages that follow offer a seriously fun inventory of wines by the bottle. The atmosphere is casual, contemporary and inviting.

Arriving at 6:00 p.m. on a weeknight, we managed to secure the last three open seats at the bar and proceeded to receive wonderful advice and attentive service from our bartender. As we nibbled on a divine selection of cheeses, our group ordered four wines to sip and share, three whites and one red:

Seeing the baked cauliflower and roasted carrots pass by us on their way to neighboring diners, we wished we didn’t already have dinner plans elsewhere. We vowed to come back, both to try more of the menu as well as to experience #AldoAfterDark, where a large format bottle personally selected by Sohm is opened each night at 10:00 p.m., giving lucky guests a rare chance to try some pretty sought after wines. 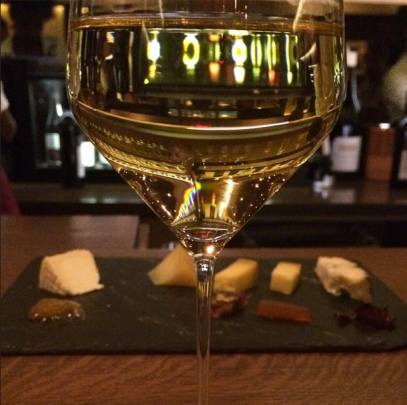 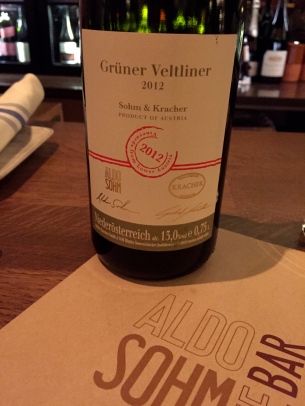 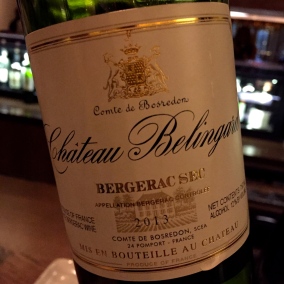 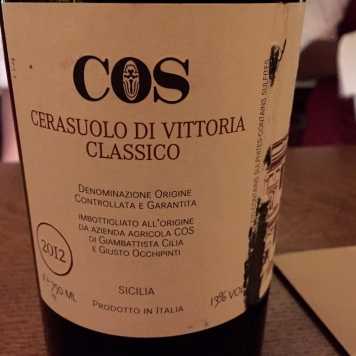 As for the new sights we enjoyed, our highest point (literally) was the 65th floor of 30 Rockefeller Center at the famed Rainbow Room. The sunset that evening was about as perfect as one could want, giving us one of the best views we’ve ever had of the city. Our lowest point was an even greater treasure: deep beneath Grand Central Terminal, we visited the secret railway platform that President Franklin Delano Roosevelt used so that he could arrive in New York privately, without the public seeing evidence of his polio and use of a wheelchair. The abandoned train car, the very one that he traveled in, now sits rusting and ghostly beneath one of the busiest buildings in town.

Our favorite display of tulips on this trip was at Madison Square Park where the infusion of dramatic purples into the more traditional yellow was a treat. A nighttime event at the New York Public Library gave us the chance to see the interior one of our favorite buildings in a new light, pink to be exact, lit for a party. And we also made a stop at the off-the-beaten path Rubin Museum of Art in Chelsea to see it’s collection of Tibetan and Himalayan statues, tapestries, and art, a quiet retreat from the busy city streets.

A rare view of Grand Central Terminal, looking down from the very top of the center arched window. ©2015 Lucy Mathews Heegaard

Behind the scenes at Grand Central Terminal. ©2015 Lucy Mathews Heegaard

Train car used by FDR to arrive at the Waldorf Astoria in NYC in private. ©2015 Lucy Mathews Heegaard

Mask at the Rubin Museum of Art in NYC. ©2015 Lucy Mathews Heegaard From the 65th floor of 30 Rockefeller Center, no better weather for such a spectacular view. ©2015 Kip Heegaard

So this week, we toast to Manhattan, always hopeful, especially in springtime, and raise our glasses to the city that offers the discovery of new haunts and treasures no matter how many times you visit. Cheers!

Misha, the Kitten and the Eight Golden Coins