How could you not like a place that offers you a hundred thousand welcomes? The Emerald Isle. Home of the fabled leprechaun. Legendary for its pubs and hospitality; its seaside cliffs and windswept hills; its River Dancers, penny whistles and poets. What’s not to love? Yes, Ireland charms me like few other places.

Yet when I traveled to Dublin, one thing I did not expect to find was a hub of creative cuisine and excellent wine. My mental image of Irish food was limited to hearty fare like fish and chips, stews, and anything with cabbage. I thought Guinness was the only beverage. But I learned from my very first trip there how wrong I was. Regular readers may recall the epic story of my travel delays in getting to Dublin with The Daughter in January when she was starting a study abroad term. One of the many silver linings of that trip was our discovery of a delightful wine bar called La Cave which defied all my preconceptions.

In the months after returning home, I began keeping tabs on the Dublin food and wine community by following a host of friendly, wine-savvy, Irish tweeters. I began to make mental note of the number of wine bars there that were being touted for their culinary wizardry and great wine lists. One name kept surfacing more than others: ely wine bar. So when I planned a trip to visit The Daughter this spring, I made sure to book a table for the two of us. [Special shout-out to @frankstero and @magswinetotry who were the first to alert me to ely.]

Like many restaurants in Dublin’s city centre, ely is located in the basement of an old Georgian building. Cozy but not cramped, the atmosphere is intimate and wine cellar-ish which immediately made me feel both pampered and right at home. Husband and wife team Erik and Michelle Robson founded ely 15 years ago with the goal of establishing “the best Dublin wine bar serving the best wholesome slow food.” Offering over 400 carefully-selected wines, the ely wine list is actually a hefty book. 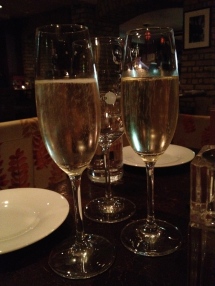 The Daughter and I decided to start with a glass of bubbly and asked our server, Kevin, for his opinion of the Prosecco versus the Cava offered by the glass. He proceeded to give lovely descriptions of each, with the Prosecco having a slightly sweeter, fruiter flavor and the Cava being more crisp. He offered us tastes of both to help us choose, but we decided instead to order a glass of each and share. This led to a delightful tasting exercise as we traded the Prosecco and Cava back and forth, discerning the differences and similarities.

When Kevin checked back to see which sparkler was our favorite, we had to admit that we’d gotten too distracted by our appetizers to declare a clear winner. They both paired so well with our starters: a goat cheese mousse with crusty, grilled bread that was accompanied by pearl barley so delicately cooked that it reminded more of pearl couscous than a grain; and a roast cauliflower dish with parmesan, truffle and curly kale that had flavors mingled in perfect balance. Not a morsel remained of either. 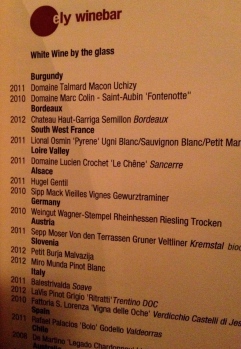 With Kevin’s help, we moved next to a tasting experiment comparing Sancerre to Pouilly-Fuissé. Sancerre, which comes from the Loire region of France, is primarily comprised of Sauvignon Blanc, while Pouilly Fuissé is from the French region of Burgundy and made from Chardonnay grapes. When The Daughter tried the Sancerre, she blurted out, “I miss our cats with every sip of this wine!” Unwittingly, she had identified a scent that is known to be a signature of Sauvignon Blanc’s aroma: cat pee. The Pouilly-Fuissé was softer and more round in flavor, a gentler wine than the more crisp Sancerre. After trading the two glasses back and forth a few times, The Daughter was able to select the Sancerre in a blind tasting with 100% accuracy. In fact, she only needed one whiff to know with certainty. It was a proud mother moment for me.

For our main course we chose the “organic Burren pork, with pickled plum, salsify, potato fondant and bacon marmalade.” Burren is in County Clare, about from two and a half hours west of Dublin, and happens to be where ely rears its own organic meats— farm to table at its finest. The pork was succulently slow cooked, the bacon marmalade a brilliant touch, and we both marveled especially at how beautifully the salsify absorbed and reflected the flavors of the dish.

I asked Kevin what he would recommend to pair with the pork if he was given complete license to choose. He told me he would bring me two options to sample, saying one would be a Pinot Noir from Burgundy and the other would be a grape from Portugal that would also pair nicely. He was back at the table shortly with two glasses. When I asked which was which, he replied that he would tell me only after I tasted and declared which one I liked best. I was impressed with his saucy confidence and sense of fun.

One wine was much darker in color so I presumed it was the Portuguese wine rather than the Burgundy. Upon sipping, the darker colored wine also had more bold, ripe flavor, and a more rustic, edgy quality on the back of the sip. The lighter colored wine was more elegant and more acidic. Both were very good, but I preferred the softer wine with the pork, declared my preference and noted that I guessed this was the Burgundy. Kevin affirmed my assessment but said that the other wine had actually been a Pinot Noir from Bulgaria, as he’d discovered they were out of the Portuguese wine he initially wanted to offer me. Delightful! I hadn’t even known that Pinot Noir was being produced in Bulgaria. 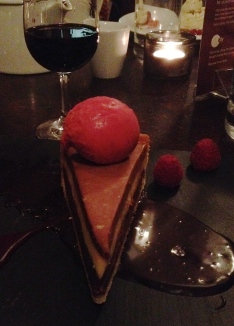 For dessert, The Daughter chose the white chocolate cheesecake with strawberry compote, while I selected the trio of chocolate tart and raspberry sorbet. Banyuls, a rustic, port-like aperitif from France was the recommended pairing with the chocolate tart so, of course, I ordered it. When Kevin returned to the table, he reported that they were out of the Banyuls but he had two samples in hand for me to choose from as a replacement. I knew better than to even ask what was in each glass ahead of time.

On sipping, one was clearly a port, while the other, was a bit lighter in color and a slightly amber-tinged. I tasted some port-like qualities in the second one and it was smooth to sip, though on the back end the alcohol in it was more apparent. Both delicious, I opted for the one that tasted more port-like to me and it was, indeed, a 1998 Warre’s Vintage Port. The alternative choice turned out to be a Madeira. Another delightful tasting exercise!

We had plenty of time to linger over the meal and savor both food and wine. But neither were we abandoned— it seemed that whenever we needed something, Kevin was there with perfect timing, delivering impeccable service unobtrusively and seamlessly. If you are lucky enough to have a superbly prepared meal offered with such an artful balance of timing and presence, and with a dash of good humor and education on wines in the process, a great meal becomes sublime. This was the essence of our experience at ely.

When we noticed that ely has two other locations besides the one we visited, I wished for more time in my trip to be able to dine at the other two. Yet, I consoled myself with the thought that the things I’d left undone in Dublin would simply become good reasons to return. After all, how can you not want to go back to a place that offers you a hundred thousand welcomes?

So this week, we toast to a hundred thousand welcomes for every visitor, to Irish hospitality at its finest, to artfully prepared Irish cuisine, and to the good folks at ely wine bar. Sláinte!